Claude Rohwer was a career minor leaguer having played in San Francisco, Charleston and Sacramento. He was the younger brother of Ray Rohwer, who played in parts of two seasons with the Pittsburgh Pirates.

While the back of this card is blank, a previous owner left me a few notes: It reads: "Claude, 3B-SS-OF, not in ML."

Claude Rohwer in a nutshell. His entire career summed up in only a few words.

While his playing career might seem to be unremarkable, he was good enough to play in the old Pacific Coast League. Many at the time considered it to be the third major league.

And as a player in the PCL he would be immortalized on this beauty of a poor old baseball card.

These cards were produced from 1911-38 and found in boxes of Zeenut and Ruf-Neks candies. They came with coupons attached to the bottom of each card. The coupons were usually removed and exchanged for premiums. Cards with coupons add significant value to a card. While not unheard of, cards with coupons are rare.

The story goes that on Oct. 6, 1945, the owner of the Billy Goat Tavern bought two tickets to Game 4 of the World Series at Wrigley Field; one for himself and the other for his pet goat. The owner was let in but not his four-legged friend.

The goat's owner was incensed, declaring that the Cubs would never win again. And so it has been, the Cubs have not won a World Series since. It's a good story and it may be true. But I have a different thought as to why the Chicago side hasn't won a world title since 1908.

You see, Jimmy Slagle played center field for the Cubs in 1907 and 1908. The Cubs were World Champions both years, their only Series wins in their history. In 1909, Slagle was relegated to the minor league Baltimore Orioles. The Cubs finished second to the Pittsburgh Pirates in the NL.

Coincidence? You be the judge. 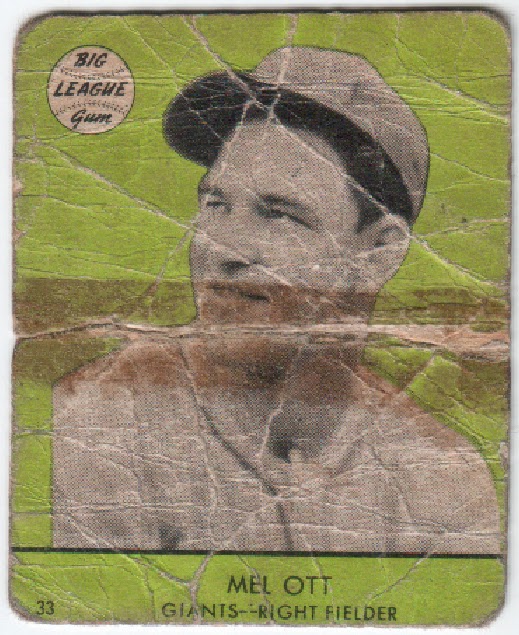 This is not 1933. This is 1941 and the only names most anyone have ever heard of are Mel Ott and Carl Hubbell. Hall-of-Famers, sure. But not on the caliber of Ruth and Gehrig.

Nonetheless, I was very excited when this card arrived. It met all my criteria for a poor old baseball card.