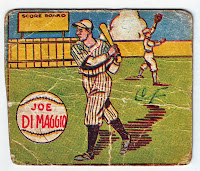 About a week ago, while searching eBay for Poor Old Baseball Cards, I saw a 1940 Playball Joe DiMaggio that was in horrible shape. It had a low starting bid and a few days before the auction ended.

I was not a winner. The card ended up selling for $132. More than I was willing to spend.

I never thought "Joltin Joe" would ever be a part of my collection. He didn't appear in very many issues after all.

A new search revealed this card. Produced by Michael Pressner Company of New York in 1943, it was a card of DiMaggio during his playing days. It was also produced during World War II.

I wanted it. It was old. It had rounded corners and deep creases. It had writing. It was perfect. 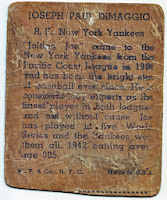 By the way, that's a "CF" written in blue ink: Center field. That's the position Dimaggio played. But you woldn't know it by looking at the card's reverse. It lists him as a rightfielder.

One more thing, I got this card at a steal.

I posted this same card several months ago. It used to look like this.

But a week or so ago, my chihuahua/pug mix decided it looked more like an appetizer.

It wasn't. But it was sad to see Frank Howard in distress. I quickly picked up the pieces and put them aside. I thought it was beyond repair.

Tonight I figured, with the help of some transparent tape, I'd put it back together. And from what I can tell, I think it's all there.