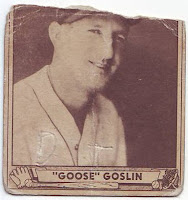 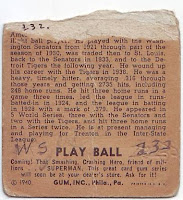 I've recently purchased a half-dozen Play Ball's over the last week, one in worse condition than the next.

When I saw this Goose Goslin I had mixed emotions. Is a baseball card a poor old baseball card even if it has the top quarter torn completely off?

I own plenty of cards that have been torn but taped back together. Just look at my last post. But this piece is just flat out gone. The more I think about it the more I really don't care.

This card seems to have as much character as any, maybe even more. Plus it's more than 70 years old. And it's a Play Ball, one of the most underrated sets ever.

And as a bonus I was reading the ad underneath the PLAY BALL logo on the card's back.

It reads: Coming! That Smashing, Crashing Hero, friend of millions. SUPERMAN. This great card gum series will soon be at your dealer's store. Ask for it. 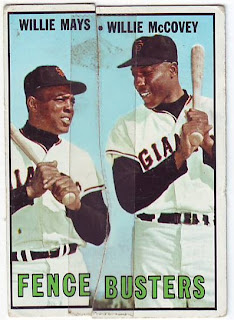 If cards could talk.

For about 75 cents per half how could I resist this beauty.

It seems that years ago, someone decided to make the split. It reminds me of one of those old prom photos that you cut in two after breaking up with an old girlfriend.

I wonder which Willie broke the previous owner's heart.

Could it have been Mays after returning to New York in 1972? Or maybe it was McCovey who left the Bay Area for sunny San Diego in 1974?

Either way someone made this relationship whole again. And all that was needed was a piece of tape.

As a kid, before the Internet existed, I got my early baseball knowledge from things like encylopedias, almanacs and books.

I remember walking into a bookstore that was right around the corner from my grandparents home and finding "Baseball As I Have Known It," by Hall-of-Fame writer Fred Lieb. Lieb's love for the game began in the early 1900s when he cheered on his Philadelphia Athletics during the American League's earliest days.

He would later cover that team, along with several others as he made his mark as a reporter in Philadelphia and New York. His book is a wealth of knowledge. And I read every page.

Chapter 8 is titled: Hal Chase: He had a corkscrew brain. It focuses on the darker side of baseball -- Gambling, throwing games, cheating, you name it. And at the center of it all was Hal Chase.

Chase was regarded as a smooth-fielding, good-hitting first basemen. One of the best. Some would even consider him as the deadball era's biggest draws along with Ty Cobb.  Lieb mentions him as being on par with the likes of Lou Gehrig, Bill Terry, Frank Chance and George Sisler. But only when he wanted to be. It seems like he had all the skills but didn't always use them.

He would often be late in covering the bag or let the ball fall from his glove. Many of his managers flat out accused him of throwing games. And I think most baseball historians agree that he was no good. But he filled the stands and his antics were often overlooked.

By 1919, he was banished from the game. Many think he was instrumental in the Black Sox scandal that would rock baseball.

So in 1909, when a kid would have pulled this card from his dad's pack of cigs it must have come with some mixed emotions. Not only were you getting a card of one of the best but of a known cheat. Oh, and it was pink.

Probably not your first choice.