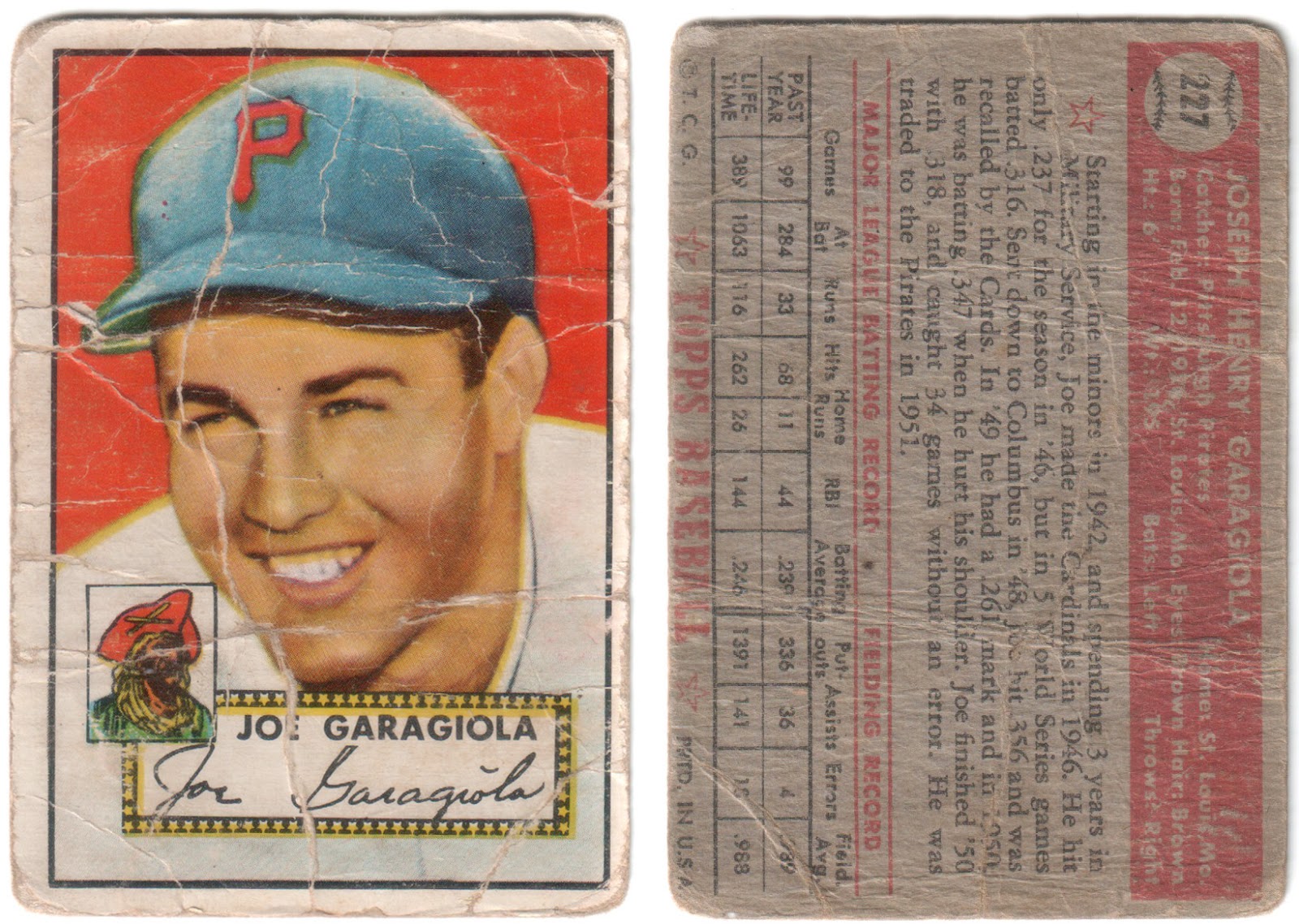 The 1952 Topps design is considered by most to be the best. And when it comes to individual cards, this Joe Garagiola ranks right up there too.

My memories of Garagiola are not as a player but as an announcer with the NBC game of the week. I remember Garagiola and Tony Kubek and Vin Scully and Bob Costas. As a kid, I would have to tune into the Saturday game to get my baseball fix. There was no ESPN and my local team was not on T.V.

Garagiola was a good catcher who was considered a great prospect. He grew up on the same street at another catcher — Yogi Berra. Of his catching abilities, Garagiola once said: "Not only was I not the best catcher in the Major Leagues, I wasn't even the best catcher on my street."
Posted by pobc at 11/15/2014 01:44:00 PM 1 comment: 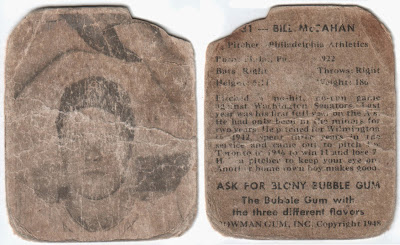 What can I say? This poor old baseball card was well loved.

McCahan was a two-sport athlete playing both baseball and professional basketball — a member of the Syracuse Nationals of the National Basketball League.

As a baseball player, he threw a no-hitter in his rookie season of 1947 against the Washington Senators. A second-inning throwing error kept him from the perfect game.

A few observations about this card:

Bill McCahan is not exactly a household name. How did this card survive? I mean, when the card got to a certain point, why wasn't it just tossed in the garbage?

How did it get so worn? My guess is it lived in the back pocket of it's first owner. Or, maybe it was kept in his shoe for safekeeping. 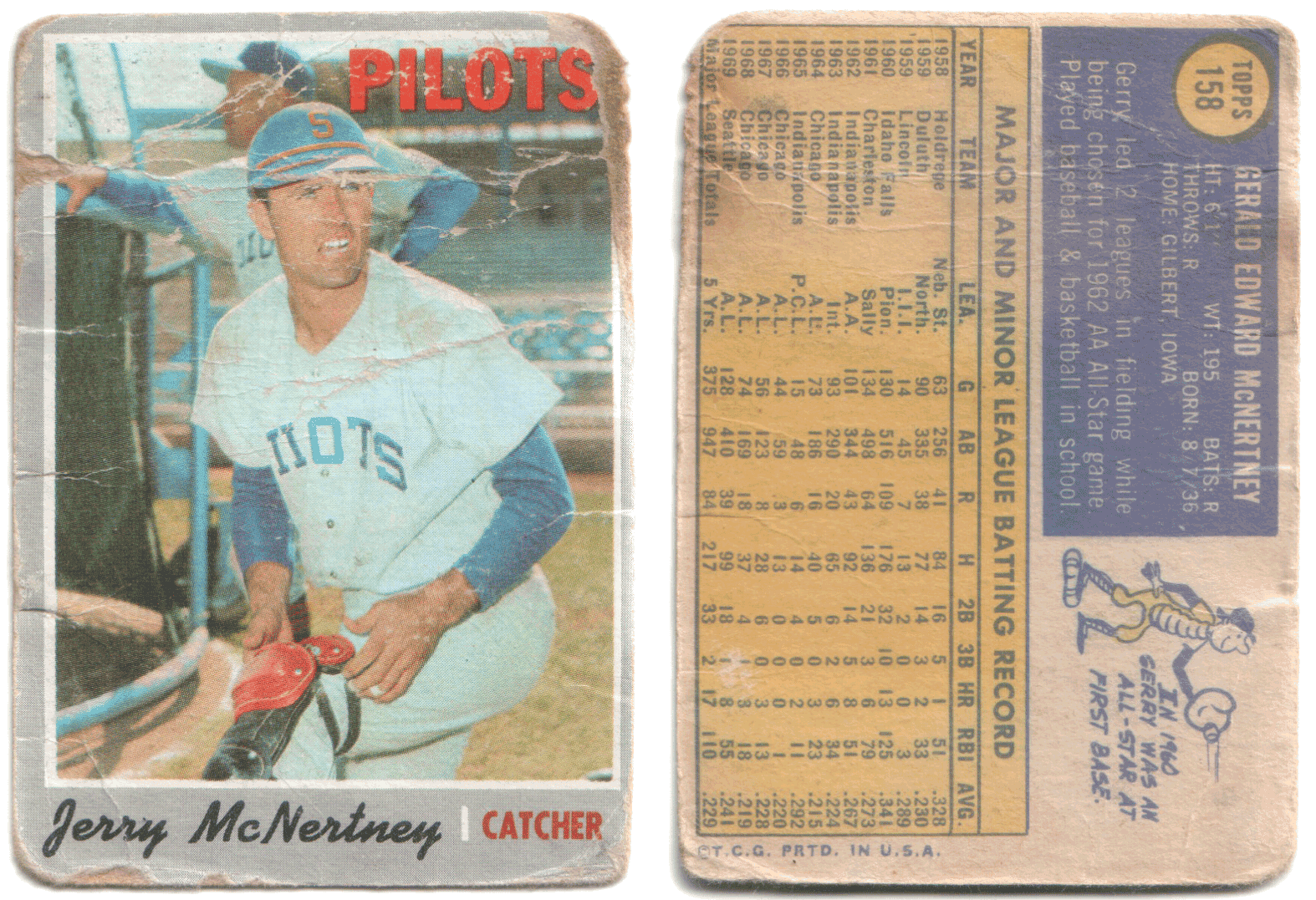 If you're a regular reader of this blog, you've probably come to realize I'm partial to the older cards. The older and poorer the better.

So when I came across this 1970 Topps card, I had reservations. It's not of a notable player. It's not particularly rare. It's not valuable. It's got it's share of creases and bends, put I've posted much worse.

The thing is does have going for it is the team: Seattle Pilots. Check out that uniform and cap.

The Pilots were born in 1969 and by 1970 had already vacated the Pacific Northwest to become the Milwaukee Brewers.

New owner Bud Selig didn't get final approval to move the team until only a few days before the 1970 season was scheduled to begin. He had intended to change the team's identity but was left with the old Seattle uniforms and colors.

Milwaukee never did change its colors. Though a different shading, the blue and gold remain. Thanks to the Seattle Pilots.
Posted by pobc at 11/01/2014 11:23:00 AM 1 comment: