Again, lots of problems with this card of the great Yankee.

This is the latest of the 1954 Red Heart cards I've purchased over the last few weeks. This is my sixth Red Heart overall. Only 27 more to go.

You see, I'm trying to complete the set and I know it's not going to be easy or cheap. You can follow my progress at my new site: 1954 Red Heart Baseball Cards. 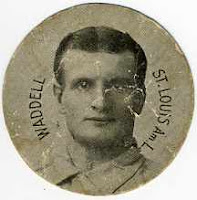 These cards came in small tins which included small mint or violet gum. I'm not sure what violet gum is, but I think it refers to the color of the small round gum pieces. I assume the mint chips were green while the violet chips were purple.

In my opinion, Rube Waddell was one of the premier pitchers of the late 1800s and early 1900s. It was well documented in the Ken Burns' "Baseball" documentary that Waddell was an odd fellow. He is said to have left the dugout, on occasion, to chase a firetrucks as they passed along the ballpark.

Whether his actions were a reaction to alcohol, or whether he was just a little off, or whether he had some sort of mental illness, there's no arguing Waddell's numbers. He ranks tenth all-time in career ERA with a 2.16. In 1946 he was elected into the National Baseball Hall of Fame.
Posted by pobc at 8/28/2008 12:03:00 AM 2 comments:

Here's a great card, with a great pose, of a great player.

I'm not sure where I got this card, but it's been in my collection for years. It was the first Koufax I ever had.

Does it look like he's wearing a jacket under that jersey? I feel hot just looking at him. 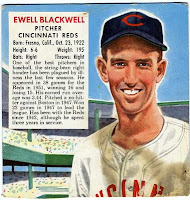 This card has several issues.

First, it's missing its bottom tab. And second, it's got some sort of staining in the bottom right corner.

These cards were issued with Red Man Tobacco and included a tab along their bottom which were intended to be cut off and sent in for a premium. Obviously this one is missing.

I hope the bottom stain is something like soda or coffee and not tobacco juice.

But McInnis is probably best known as being a member of Connie Mack's $100,000 infield with the Philadelphia Athletics. McInnis played first base while Eddie Collins played second, Frank"Home Run" Baker third, and Jack Barry shortstop. $100,000 was a ton of money in 1909.

McInnis was also a member of the World Champion Boston Red Sox in 1918.

This card was distributed with American Caramels in 1921. While the back of the card says that 80 players appear in this set, there were actually a bunch more.

I wonder how the A's payroll of the early 1910s translates into today's money. Somehow I don't think they would get close to the money paid to the left side of the Yankees infield.

From what I know, this card was given out in Oakland, Calif., at area Signal Gasoline stations. The set consists of 24 cards of Oakland Oaks players — including Charles "Casey" Stengel.

Gassaway played in parts of three major league seasons with the Chicago Cubs, Philadelphia Athletics and Cleveland Indians. He went 5-9 with a 4.04 ERA in the three years.

One interesting thing about this card is that it is very thin, not much thicker than a business card.

Over the past couple of months I've posted baseball cards that could have been found on cereal boxes, in cereal boxes, on boxes of Twinkies, in bags of potato chips and various other places.

This card would have been found with dog food.

My understanding is that if you would mail in a couple of labels of Red Heart dog food and ten cents, you could receive one of three subsets (11 cards) of this issue. A total of three subsets were made for a total of 33 cards. Each subset was differentiated by its background color. Cards either came with a green, blue or red background.

One interesting thing is that in 1954, Cardinals star Stan Musial appeared in this set but not in the popular Topps and Bowman sets. Mickey Mantle also appears here while not appearing with Topps.

Red Heart did a nice job making a simple and attractive issue. With Dan Dee, Red Heart provided at least some competition in 1954 to the big two gum companies of Topps and Bowman.
Posted by pobc at 8/13/2008 12:07:00 AM 2 comments:

Here's another one of those Post Cereal cards that was cut off the back of a cereal box.

I really like these old cards and they are good way to get players who would otherwise cost a bundle. Guys like Mickey Mantle, Willie Mays, Hank Aaron, Roger Maris, Roberto Clemente and Yogi Berra all appeared on these cards.

I think this card cost me about six bucks.

I wonder if Yogi's cards are becoming more popular as he appears more and more on TV. I bet most kids today think he is that guy who is in all those insurance commercials with that duck, rather than one of the best catchers of all time.

Of the nearly 50 posts on this blog, this is the first of the man many consider to be the real home run king.

By the end of the 1973 season, Hank Aaron finished with 713 career homers, one shy of Babe Ruth's career record. He would eventually break the record on April 8, 1974, and ended his career with 755 homers.

If any card set was made for this blog, this is the one.

One card was issued per bag. And while it rolled around with the greasy chips, it picked up a few corner dings along the way. Therefore, it is almost impossible to find one of these old cards in mint condition.

This example has more problems than a few stains and corner dings. This card has more creases than I can count. But isn't it a great card anyway?

As of this posting, this is the only Dan Dee in my collection. 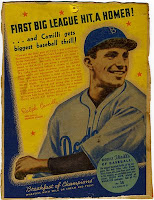 I just got back from the local baseball card show and this is one of the cards I found.

In the middle of all the autograph, relic and refractor cards was an older couple who had some of these old Wheaties panels.

I'm not really sure if I can call them cards because they are huge. Originally, theses panels would be cut off the side of the cereal box. And from what I understand they practically took up the entire back of the box.

This example is numbered No.16 of a series of 16 and is of Dolph Camilli, the Brooklyn Dodgers entry in the set. Each team, there were only 16 in 1938, had a player represented.

I was really surprised to see this type of card at a local 20-table show. I usually have to go to a regional-type show to find this sort of thing. I was also surprised to see quite a few vintage cards.

51
The number of minutes it took the New York Giants and Philadelphia Phillies to play a complete game on Sept. 28, 1919. It's the shortest game ever played in the major leagues.