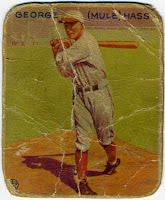 Not the "Sussudio" guy. This Phil Collins was a pitcher with the Philadelphia Phillies.

To me the card was old. I was amazed that, at the time, I owned a baseball card that was 50 years old.

I have more than a few Goudeys today, and this is one of my favorites.

As a member of the Philadelphia Athletics, Mule Haas played a big part in the 1929 World Series. He sparked his team to a win in Game 4 after hitting an inside-the-park homer in the seventh inning. The Athletics went on to score ten runs that inning, beating the Chicago Cubs 10-8.

He hit another homer in Game 5, as the Athletics won the series.

This Goudey is one of those that doesn't include the red bar along the bottom advertising Big League Chewing Gum. Something about the missing bar makes it look weird. But it's a real Goudey nonetheless.

That reference to "Sussudio" is supremely regrettable, but the salute to Oscar Gamble made up for it. Even Steven!

Good 'ol Goudeys. The ones without the bar do look extremely odd. I just bought a BEAUT for my Braves team set. It doesn't have a bar either (foreshadowing). Expect to see it soon.

LOL...trying to picture Phil Collins the drummer playing baseball..no, does not compute!!!!