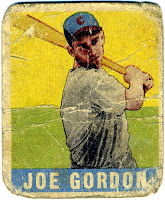 It's been about a month now that I walked into my local baseball card shop and bought about a dozen 1948 Leaf baseball cards.

Each card seemed to be in worse condition than the next but that was alright with me. The highlight of the lot was a Lou Boudreau that I paid about $15 for.

At least that's what I thought was the highlight.

While looking through the group of cards about a week ago I found this Joe Gordon. It was $5.

Not bad for a card of a man that was elected into Baseball's Hall of Fame earlier today.

When you pick up your newspapers in the morning you will probably read a bunch about Rickey Henderson and Jim Rice. I bet there will be no more than a few paragraphs on good ol' Joe.

From what I know, This is the only card produced of Gordon during his playing days. There may be a few regional-type issues of Gordon but as far as widely-produced cards go, that is if you can call the 1948 Leaf widely produced, this may be the only card ever made for Gordon.

Wow! Great pick up! Thanks for sharing.

Very cool. I work with someone who is Gordon's third cousin, and in fact, Greg Gordon had an article posted about him finding out how he was related, in the Hall of Fame program this year. Now he wants to try and collect Gordon's cards. If you have any thought of selling it, let me know. You can e-mail me at bdangelo@aol.com

In fact there were several cards produced of Joe Gordon during his playing days. The earliest is his 1941 Double Play card. He is depicted with the N.Y. Yankees and he won the MVP award the following year. Bowman Gum Company also made cards in 1949 and 1950.