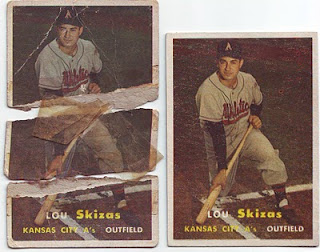 This card really gets around.

Back in May, Chris over at The Vintage Sportscard Blog showed off this Lou Skizas card (the one on the left). He mentioned how he had recently upgraded the card and that the old (three-piece) card was now available. He later posted that he never thought anyone would want the old beater.

So I offered Chris a 1951 Topps Ringside card of Lee Savold. He said yes and the trade was made. To my surprise, when the card arrived, it was accompanied by the card on the right.

He would later write: I tossed another card in along with that Lou Skizas, so it wasn't a complete "rip off" trade. Get it, rip-off. Very clever.

I thought it was a great trade. I love both cards but in particular the three-parter. If you look close enough, you may notice the card was at one time both stapled and taped together.

That is a great card. Glad you liked it.

And yes, I was absolutely not expecting a reply to my off-handed "wanna trade?" retort on the blog.

Thanks for giving it (them, actually) a good home.

That 3-parter Skizas reminds me of kids' body part matching games, where you'd swap out sections to make new, bizarre combos of people, faces, or hairstyles. With so many generic card "poses," wonder who else Lou's head could go on top of?

Just found this blog, an it's AWESOME! I think we all deep down feel kinda sorry for a beat up baseball card. This site gives them a voice. Keep it up.