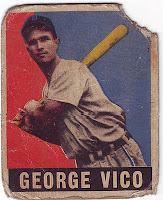 It looks like someone took a bite out of George Vico.

On April 20, 1948 Vico made his Major League debut as a first baseman for the Detroit Tigers.

And on the first pitch he ever saw, Vico hit a homer.

No kidding, a home run on the first pitch.

But what first attracted me to this old card was its vibrant red and blue colors. And the fact that it's from one of the best baseball card sets ever produced.

Glad to see the blog up and running

Nice choice--that card even has a very familiar color combo and profile.

I like those old Leaf cards. I don't own any, yet, but I plan on getting some sometime soon, either Warren Spahn, or Virgil Trucks...

Wow, that really is a beautiful card. Never seen that one before. The way Vico cuts across the card diagonally, dividing the red and blue sides is really striking. An aesthetic gem.