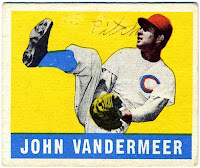 Are you kidding me? Two consecutive no-hitters.

Vander Meer accomplished the feat in 1938. On June 11 he allowed no hits against the Boston Bees (Braves). Four days later he did the same against the Brooklyn Dodgers. What's even more amazing is that he did it both times on the road.

Apparently the Reds wanted him to change his uniform number to "00" after the accomplishment. He never did.

The back of this cards advertises a 12" x 6" pennant from any National or American League team. All you had to do was send in five baseball card wrappers and ten cents.

Now THAT is a sweet card.

Okay, thanks to your blog I am now IN LOVE with these 1948 Leaf cards. 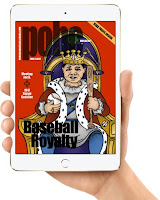 51
The number of minutes it took the New York Giants and Philadelphia Phillies to play a complete game on Sept. 28, 1919. It's the shortest game ever played in the major leagues.