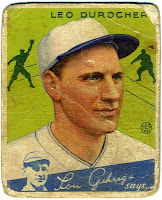 It arrived yesterday. I had been waiting for nearly a week and it finally made its way into my mailbox.

How cool is this card! I'm a big fan of Goudey in general and this1934 card is a favorite. And a Hall-of-Famer nonetheless. Check out that lime-green and blue coloring. I love how the 1934 Goudey has a little note from the great Lou Gehrig. For the record, cards 80-91 had a quote from Chuck Klein. There are 96 cards in the set.

Durocher is best known as a manager but is shown here as a shortstop for the St. Louis Cardinals "Gashouse Gang." His scrappy play helped inspire the nickname as the Cardinals went on to win the World Series in 1934.

Hey love the card. Just picked up a really bad condition 1933 Goudey from a random card shop the other day. Interested in a trade?

Loved reading your blog. I too have some Poor Old Baseball Cards and will probably never part with them. Mine only go back to the early 1960's though, but that's old according to my kids, as I approach my 50th year! Keep your posts coming!