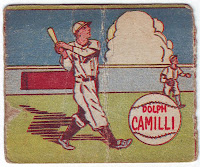 Having been a player during World War II, Adolph Louis Camilli simply went by Dolph. Good choice for the 1941 National League MVP.

You don't see these old cards everyday and so when I saw this affordably-priced example on eBay a few weeks back, I snapped it up.

This set was produced by the Michael Pressner Company of New York. From all accounts, they were a novelty and carnival supply company, whatever that means. I think they made those toy trinkets you could win at the fair if you could knock over those milk bottles or get the rubber ball in the peach basket.

There were a total of 24 cards in the set and they were sold at candy stores in strips of eight. They're significant since they were one of very few baseball card sets produced during the war.

Personally I think they are great. They remind me of "Bazooka Joe" comics. I read where someone called these cards among the ugliest ever produced. I disagree.

So they don't have fancy graphics or real photography. I bet the kids loved them in 1943, a diversion from what was happening overseas.

Similar cards were produced in 1949 using the same cartoon figures. One difference between the sets is that the later was numbered.
Posted by pobc at 3/22/2012 12:35:00 AM

That is a great card.

Is that a cloud in the background or testing for the Manhattan Project?