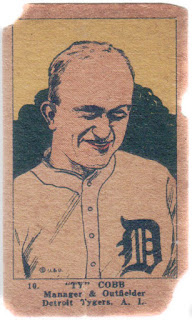 Beginning in 1921, Ty Cobb had become player/manager for the Detroit Tigers. So was he more player or manager?

As a manager, Cobb served Detroit from 1921-26 having compiled a 479-444 record. His best managerial season was 1923, when his team finished second in the American League to the New York Yankees.

What a funny card. Definitely not a very good likeness of Cobb. Probably made him angry.