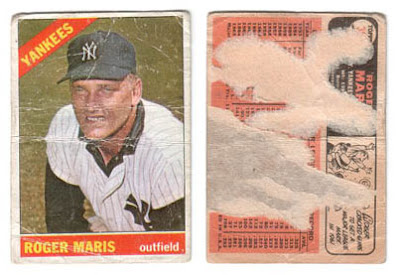 Roger Maris is not in the Hall of Fame. Should he be?

Those are Hall-of-Fame numbers, his lifetime averages, not so much.

Maris would play his final season with the Yankees in 1966, traded to the Cardinals later that year. His cards, while not commanding the prices of his teammate Mickey Mantle, are very desirable.

His 1962 Topps cards is one of my favorites. It would easily be one of the first inductees in my baseball card Hall of Fame.

Does not belong in the HOF, but he is an interesting anomaly. Only 2 other players ever won 2 mvps and didnt later get in.

(Non-steroid tainted players, that is)