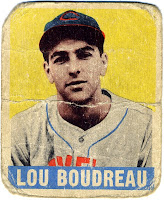 He won the league's MVP award, was named to the All-Star team and won a World Series as player-manager of the Indians. He was even named AP's male athlete of the year.

He also finished second – Ted Williams, .369 – in batting average with a .355 average. He batted .263 in the World Series and led shortstops in fielding for the season with a .975 average.

As a Cubs fan I grew up listening to Lou on WGN radio. He was a great guy. Every year during rain delays, on TV, they'd show film of the 1948 World Series, saying they had to because it was in Lou's contract.

Very sweet card. I've been waiting for a cheap one to become availble to add to my collection. Love these 48 Leafs. Nice pick-up.