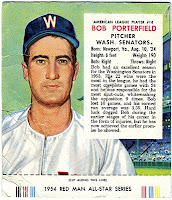 Of the nine Red Man cards I own, this is the only one that has its tab intact.

That little strip below the perforated line is there for a reason: After your dad would pass along this card after buying the pack of chew, the first thing you would do was cut off the tab. After collecting 50 stubs, you would send them in along with the name of your favorite ballclub.

And in 1954, what you would get in return was a baseball cap.

I bought an Al Rosen card from this set off of ebay recently and was sad to see how big the cards are. I thought I would send the card to get signed, but they are way too big for my binder.

What do you do with these cards?

4 pocket pages should hold them properly, with or without tabs. It would be great to have a signed Red Man!

I recently got my first Red Man card from Ebay for $10 it was the '53 Bob Porterfield with the tab. It's in very nice condition, much better than some I've seen w/out the tabs.

One of my Short term goals is to get the other Senators (and probably the Orioles) from the Red Man sets, preferably with the tabs. A long term goal is to get most of the others in whatever condition.