This cards is downright cool.

Distributed in packs of cigarettes in 1911, this issue includes two players.

The full panel is of Hall of Famer Fred Clarke. Clarke was a player/manager for four Pittsburgh pennants. He was also a teammate of Honus Wagner. 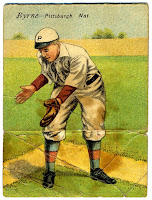 On the other side of the card is Robert Byrne, Clarke's third baseman.

When you fold the card in half, Byrne's body overlaps Clarke's and the combination of Byrne's top and Clarke's bottom produces its own image.

I had seen these listed on ebay and wondered about the half-card on the back. Thanks for showing off how these worked! Like a mini MAD... :-)

GREAT CARD THEY ARE SO CONDITION SENSATIVE SET. TO FIND A GEM WILL ALMOST NEVER HAPPEN!! MORE PEOPLE FIND THESE CARDS IN THE PAGES OF OLD BOOKS TO KEEP THEM FLAT.. START CHECKING THE INSIDE OF OLD BOOKS FOR THAT GEM. THANKS FOR A GREAT POST!!